10 Tips For Interviewers In A Job Interview

Tips For Interviewers: A Guide

Whilst there are lots of tips out there for succeeding in an interview for candidates or calming your nerves, you see neither as much advice or tips for interviewers in delivering the interviews for prepared candidates.

So here is a list of 10 useful tips for interviewers during a job interview:

1.  Prepare For Each Interview

It is highly likely that you will be interviewing more than one person for any employment position you have available.

Being prepared can help your interview run smoothly and more efficiently which in turn will leave your candidates impressed and more interested in succeeding in the process. A few things which you can do to help you prepare:

Reread their CV before they arrive to gather all the necessary information about them.

Prepare your introduction and the job role breakdown.

Understand the qualifications and skills set each candidate will need for the role.

Arrive significantly before the interview time in case any candidates are early.

Preparation for hosting an interview is a key factor in ensuring the process runs smoothly and make a good first impression. If your interview is unorganised and chaotic, this can paint a bad picture to your interviewees who may not want to be a part of your team.

2.  Have All Your Questions Ready to Ask Them

During your interview, you need to find out as much information about the candidate as possible to allow you to accurately assess whether they are suitable for your position or not.

It isn’t uncommon that during an interview process, you will have more than one candidate who ticks all the boxes and is suitable for the role. This is where well-structured questions can come into play and help you narrow it down to the one individual who is the best fit.

Keep your main questions consistent throughout each section as this will allow you to narrow down the candidates and choose only the most ideal one for your role depending on who answered your questions the most appropriately.

Questions which you can ask should always be kept relevant to the job role you are offering. This will prevent you from going off topic too much and running out of time.

Things you may consider asking can include:

What can they uniquely offer to the company?

By asking each candidate this question, you will be able to filter those who have, and have not, done their research on your company and the role they are applying for.

You are after a candidate who can bring attributes to your company which nobody else can and help your business grow positively.

What jobs have they previously had and how long for?

Whilst you can’t say no based solely off their previous employment history, it may raise alarm bells if they have had multiple jobs in such a short space of time. If they have listed all their previous jobs, you should ask questions addressing why they have changed their employment so much and if there was an issue.

If there are a lot of missing gaps with periods in which they weren’t employed, make sure to ask them what they were doing in this interim time frame.

Ask for dates and specific details to ensure they are telling the truth.

If a candidate lies at the start of your interview about previous employment or qualifications, chances are they will not remember the same details they told you at the start. Ask plenty of questions at the start and jot down all key dates and information they mention to you. Bring these up later and to see if they match up.

Then use your judgment on whether you want to bring these up for the candidate to explain…or if they are too egregious then just mark them down as unsuccessful.

What strengths do they have?

Finding out which strengths a prospect has will help you determine whether this role is for them, and the chances of success they will have in the position being offered.

If the company, you are employing for is flexible and you find a great candidate who fits the mould for the company but not in that specific role then forward this on to upper management with a breakdown of their skills and should a role be open recommend them on to that.

Why they think they should be considered?

This will help you establish which candidate is dedicated to the role and why they believe that this role should offered to them. You will gain a good understanding of their personality as well as their confidence.

A great way to differentiate candidates who are enthusiastic about the role offered and those who are just approaching it as an opportunity to be employed will often describe their reasons very differently.

3. Be Professional And Courteous

Turn up to your interview on time and do not leave your candidates waiting after the allocated time has passed.

Once they have arrived, offer them a glass/bottle of water or a hot drink. If there is time before or after the interview, ask them if they would like to have a tour around the business and where they would be located if they were to be successful. This will allow them to picture themselves working there and if they feel happy as well as comfortable.

Ask them questions about their day so far or if they found your location easily enough as this will help them relax and feel comfortable.

It is recommended that you do more research and learn about the specifics of the role being offered.

This can include how many members will be on their team, the basic salary, what perks and benefits they will be offered, the usual hours and whether there is significant room for career advancement.

Having this information on hand will help you to round out the process and also address any questions which they may have for have for you at the end of the process.

5. Be Prepared To Answer Questions Yourself

Like we mentioned above, you need to be prepared at all times for any questions thrown your way.

Your interviewee may ask you anything during the process to allow them to get a better understanding of your business, so you need to be ready.

They can ask you things such as what the day-to-day responsibilities of the role are, where you think the company is headed in the next five years and whether there are opportunities for career advancement.

If they ask you a question, you want to be able to answer them straight away and fluently. This will show the candidates that you are organised and professional–if you can’t answer standard questions then the candidate will have a negative impression of both you and the company employing. 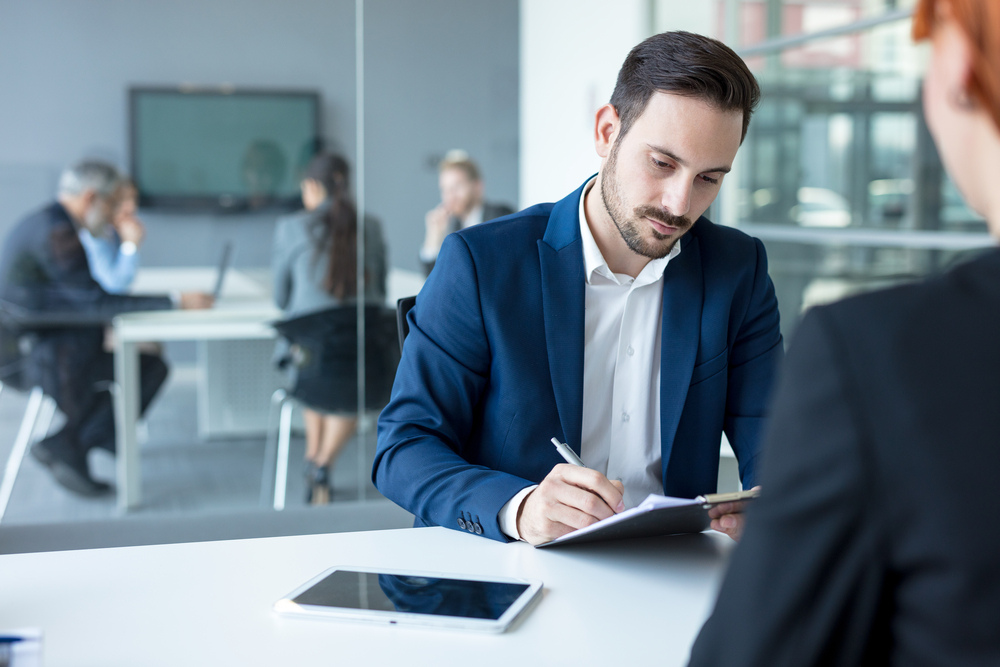 6. Keep To Your Time Scale

Whilst it isn’t professional or courteous to cut an interview short and stop an interviewee from talking, you don’t want to allow the interviews to run over and into your next candidates time.

The knock-on effect will mean your day will be delayed throughout, and it will cause your later interviewees to be sat waiting for you to finish.

As an estimate, interviews can take up to 30 – 45 minutes each and may go on for longer if they are going well.

When you are planning your interviews, you need to consciously think about how long each interview should take and add extra time to each one as this will allow for things to slightly overrun without times clashing and causing delays. This will also give you the opportunity to clean down any surfaces or glasses before your next interview.

Taking notes will help you remember every detail about each candidate you interview. If you are interviewing multiple candidates, you may find it difficult to remember key information which can be vital when you start choosing who to employ. On average you will interview 6 candidates for each role you have on offer.

You may find it easier to write down your questions before each interview as this will allow you to write down their answers quickly and efficiently. You don’t want to spend all your interview writing and not listening or paying attention to points.

When you are taking notes, always write each candidates names on the notes as this will help keep things organised and prevent any confusion.

8. Be A Good Listener

Not only does this show that you are genuinely interested, but it also means that you will pick up all the information you need from them.

Being a good listener doesn’t only mean listening to what they have to say, but it also means listening and watching their body language which will help you pick up on how they are feeling and their dedication to the role.

Listen to their speech and provide them with encouragement to allow them to continue speaking about themselves and why they should be part of your company.

Talking less during your interview will offer your candidate the chance to speak about themselves and the different things which they can bring to the business.

If you are consistently speaking throughout the interview, you are not giving the chance to your candidate, and they may not feel confident enough to try and speak.

Start your interview with an opening speech by introducing your business and the role they are applying for. Once you have done your speech, you can start to ask your question and leave the majority of the talking down to them. But do not go silent! Offer replies and give them confidence.

You can never foresee how things are going to go but adhering to a structured plan for your interview will help things stay on track as much as possible.

Keeping your interviews organized will offer you a higher chance of things running like clockwork and less chance of becoming delayed and running late.

Plan how you would like it to go, and which order things need to go in. If you are offering them a tour, decide whether this is going to happen before or after your interview.

Also decide prior to the interview if they need to carry out any tasks and what these tasks should be. Structuring everything into a logical order will help you stay focused and will also produce a better experience for the interviewee.

Interviews can be a stressful part of your working day, especially if you are short staffed and in desperate need of new recruitment.

Hopefully after following these helpful tips, your interviews will become less stressful and more relaxed. Remember, this is a time to get to know a potential new team employee so make it an enjoyable process for all of those involved.